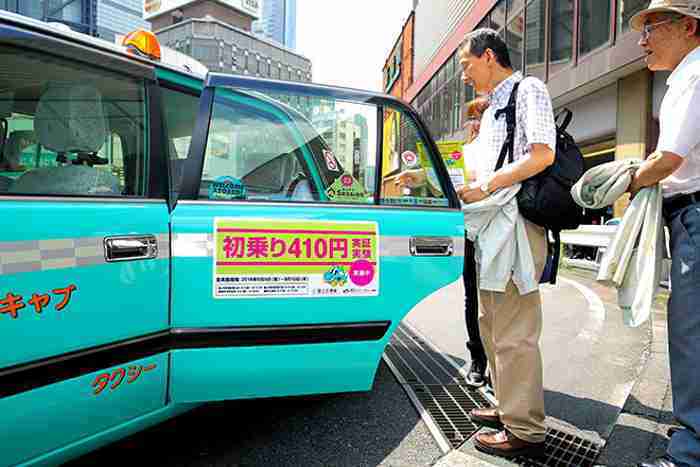 Tokyo:- Cab firms in Tokyo started experimenting with a lower minimum fare of ¥410 last Friday in four wards in central Tokyo to assess demand for short trips among tourists and the elderly. Muslim tourists should give a try and thus save little bit on Taxi fares in the country.  The objectiove of the lower taxi fare policy is to ttract more and more visitors ranging from foreign tourists to locals.

The trial fares will be offered at Shinbashi Station in Minato Ward through Sept. 15, and over 10-day periods in turn at spots in Taito, Shinjuku and Bunkyo wards.

While the initial fare is usually ¥730 for the first 2 kilometers in Tokyo’s 23 wards and the adjacent cities of Musashino and Mitaka, the lower trial fare of ¥410 will apply to the first 1.059 km. This means the cost of a trip will be little cheaper for journeys up to 2 km but could be higher over longer distances.

At a taxi stand in Shinbashi, people of all generations were waiting to try the cheaper taxis.

“A cheaper minimum taxi fare would be great, especially for people in a hurry because of train delays,” a 39-year-old woman said.

A couple in their 70s said they wanted to try the new fare to calculate the overall cost of taking a taxi to their destination.

Besides Shinbashi, taxis with the trial fare will be available at Asakusa Station in Taito Ward, Shinjuku Station and the University of Tokyo Hospital in Bunkyo Ward.

Riding a tax generally provides a chance especially to first time visitors to the country to experience the real Tokyo  and not just its train stations.  However, it is yet to be seen what the final outcome of this short term lower fare policy will be after the trial period is over.