You are here: Home / Tourism / Japan Opens Up To Halal Tourism For Muslim Travelers

Japan Opens Up To Halal Tourism For Muslim Travelers 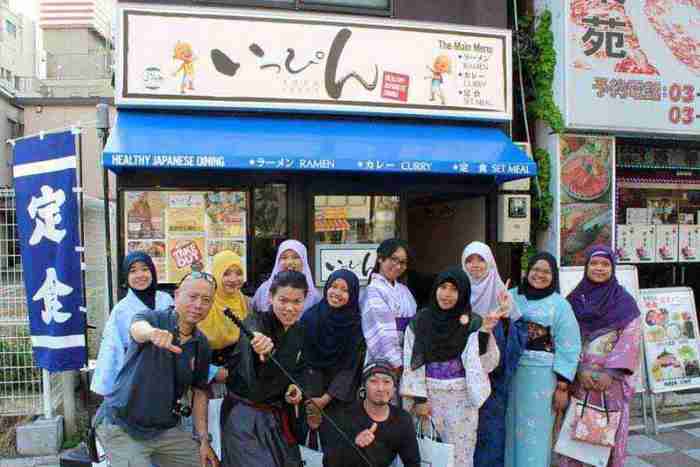 Tokyo:-  The Japanese government wants to attract more Muslim tourists from the Middle East and last year eased visa restrictions for citizens of several regional countries, including the UAE and Jordan.

While Emiratis can apply for a multiple-entry visa to Japan that is valid for three years, Jordanians are exempted from visa fees.

“I think [Japan] is opening up slowly,” says Shusaku Hinoki, at the inbound tourism unit of Free plus, a Japanese private tourism company.

“There has been some movement for restaurants to open up for Muslims, and preparing halal food,” he says.

Apart from the Middle East, there is an increasing number of tourists from Muslim countries in East Asia, such as Indonesia and Malaysia, to Japan.

Japan has focused on boosting tourism figures and aims to capitalize on the 2020 Olympic Games to attract one million Muslim visitors a year. This is about 4 percent of total tourist numbers today, with annual growth forecast at 18.7 percent to 2020, according to Crescent Rating.

To boost the figures, Japan also started offering visa-free entry to Indonesians, Malaysians and Thais, to cater better to the 65 per cent of Muslim visitors who come from South East Asia.

As the number of Muslim tourists has risen, so have halal facilities and services, evident in CrescentRating’s Muslim Friendly Travel Index score for Japan, which rose from 3.9 (out of 10) in 2013 to 4.5 in 2014.

Indicative of this trend is TFK Corporation, an airline caterer in Tokyo, which recently invested about US$530,000 to upgrade its facilities at Narita International Airport to be halal-certified for in-flight meals.

A mobile phone app – Halalminds – has also been launched, by an Indonesian, to help Muslims locate halal products in Japan.

For those who do make the trip, there are some dedicated operators offering holidays and tours expressly designed for Muslim visitors.

One such is Miyako International Tourist Company, based in the city of Hiranoku in Osaka Prefecture, which has been offering halal tours since 2012.

“With our trained Muslim staff, we specialise in hosting Muslim travellers by planning their trips and arranging their tours to Japan,” the company says.

“We understand the concern of Muslim travelers regarding halal food, praying facilities, and all other aspects that fulfill our religious belief. Also, you will enjoy visiting the mosques in Japan and see the Islamic scenes of Japan,” it adds on its website.

In the past two years, the tours have attracted 400 to 500 guests, making up 30 per cent of the company’s business, says the company representative Ryoma Miyoshi.

Its Aladdin Tour leaves the guests’ hotel in the Japanese capital at 9 am.

The bus takes the tourists past the Imperial Palace, the residence of Japan’s imperial family, to Nakamise Street, a shopping arcade founded in the 17th century and lined with 90 shops selling traditional fare. It runs from Kaminarimon Gate to the Buddhist temple Senso-ji.

The tour then goes for a halal lunch at the Malay Asian Cuisine restaurant.

After lunch, the tourists go up Tokyo Tower, a 333-meter self-supporting tower from the observation deck of which, on a clear day, one can enjoy the view of Tokyo and even see Mount Fuji. Next, tour members visit the Tokyo Camii, a large Ottoman Turkish style mosque, with the Turkish Culture Centre on the first floor and a prayer hall on the second.

Finally, they go to the twenty-fifth floor of the Shibuya Excel Hotel to watch people crossing Shibuya Crossing, the most crowded crossing in the country, and finish the tour at 6pm.

As well as halal food, the tour includes locations and time for prayers.

“We started holding the tours after receiving requests for them from Muslim customers,” Ms. Aida says.

Of course, such tours do not pass haram places such as gambling dens and adult entertainment venues popular with non-Muslim visitors, says Hind Hitomi Remon, the chairman of the Osaka City-based NPO Japan Halal Association (JPA).

“[The tour guides] also give suggestions for suitable gift purchases,” she says.

Saeed Akhtar, the chairman of the Nippon Asia Halal Association, based in the city of Chiba near Tokyo, says the growth of the halal sector in Japan makes it much easier and more attractive for Muslims to visit. In Japan, the most difficult obstacle for Muslims is not practicing religion, it is the food, Mr. Akhtar says. “Prayer is not a problem, we can pray anywhere,” he says.

Before, Muslims coming to Japan as tourists needed to bring their own food because, as most could not read Japanese, they could not understand what was written on ingredient labels, he says. If food suitable to Muslims is not available, Muslim customers will not come here, he says. “Now that the halal barrier is broken, the other parts of Japan will be attractive” to Muslim tourists, Mr Akhtar says.

As little as a half-dozen years ago, Japan was virtually unknown to Muslim tourists, especially as regards to halal food, according to the Singapore halal/Muslim travel market analyst Fazal Bazardeen. But with increasing education in Japan about the needs of Muslim tourists, there is a lot more halal food offered in hotels and restaurants in the country, he says.

“That has raised knowledge that Japan has become more Muslim-friendly” among tourists from the Middle East and South East Asia, particularly those from Indonesia, Malaysia, and Singapore, he says.

The Japanese government is encouraging local firms to cater to Muslim travellers’ needs by providing small businesses with subsidies to help them offer halal products and services, as well as to obtain halal certification, says Reem El Shafaki, a senior associate at DinarStandard, a halal/Muslim market growth strategy research and advisory services company based in New York, which has an office in Dubai.

However, she believes that not all Muslims considering visiting Japan are aware of such tours and recommends that travel agencies offering Muslim-friendly tours conduct campaigns in their source countries, especially via social media marketing and marketing videos, she says.

“An especially effective way of promoting Muslim-friendly tours would be to work with influencers who have a large and engaged audience, such as travel bloggers, in the target countries,” Ms. El Shafaki says.

Mr. Bazardeen agrees that insufficient publicity is still a stumbling block to attracting more Muslim visitors at the moment.

“Japan could probably do much more,” he says.